This original band composition was published by Breitkopf and Härtel in Leipzig in 1844. Wilhelm Mejo was a composer and teacher in Chemnitz, Germany, where in 1833 he founded the Robert Schumann Philharmonic. 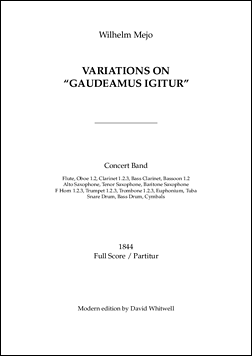 This original band composition was published by Breitkopf and Härtel in Leipzig in 1844. The composer, Wilhelm Mejo, was a composer and teacher in Chemnitz, Germany, where in 1833 he founded the Robert Schumann Philharmonic. The success of this composition resulted in another similar one, Variations sur un Thème favori für Harmoniemusik in F Major, Op. 5, also published by Breitkopf and Härtel, in 1845. The only surviving copy of this score is found in the Thüringisches Staatsarchiv in Rudolstadt (M. 53).

Gaudeamus igitur (Let us be merry!) is a very old traditional university song in Germany and still in use in schools there today. Everyone will recognize this melody because of its use, as one of four university songs, in the Academic Overture by Johannes Brahms. I was once told a funny story on this subject by Leonard Bernstein. When he had just graduated from Harvard as a music major he found himself with no immediate job opportunities and so he decided to go to the Curtis Institute of Music in Philadelphia to study conducting with Fritz Reiner. Reiner, an old world Hungarian maestro made the chief admission requirement the ability to read a full orchestral score at sight on the piano. Accordingly, he asked Bernstein to sit at the piano, where on the music stand a large score was already standing open.

Bernstein, although a fine pianist, had no experience in reading a score at the piano, with all the various transpositions, etc. Furthermore, he had no idea what this score was (it was the Brahms), until he noticed the melody of Gaudeamus igitur, a song which he, as a younger student, had sung regularly at the Boston Latin School. So Bernstein simply began playing that song in the version he remembered from his youth and Reiner, who had gone to his desk to sign some papers, leaped up and cried “Bravo! You can be a student!”

The present band composition was composed for and dedicated to “Mr. Guillaume Barth.” I believe this was Frederick August Wilhelm Barth, the conductor of the civic band in Leipzig. It was when in this capacity that in 1821 the young Wilhelm Wieprecht turned up with a letter of recommendation from the clarinetist, Hermstedt. Barth was unable to offer anything to Wieprecht in Leipzig, but gave him a letter of recommendation for the court Kapellmeister, Zillmann, in Dresden, where he was given a position.

Barth had composed at least two important band works himself, one being a Cantata, Sey gesgnet stille Morgensone, Op. 54, in 1839, for Bass solo, three-part mixed chorus and wind orchestra. This score survives, but is in private hands. The other important composition of his for band was his Grand Sinfonie pour instruments à vent, Op. 10, in three movements, for flutes, oboes, clarinets, bassoons, trumpets, horns, serpent and timpani. This score was mentioned several times in early German literature, but the surviving copy, which had been published by André in Offenbach, was lost during World War II in the bombing of the state library in Darmstadt.

Barth was a member of a family of Danish musicians working in Germany. His father was probably Christian Frederik Barth (1787-1861) who was an oboist in the Royal Chapel in Dresden from 1802 to 1841. The father had arranged a number of operas for Harmoniemusik and a set of Pièces d’Harmonie which had been published by Hofmeister in Leipzig and survives in one copy in Prague (CS-Pnm, XXI.C.178).

The present work, originally scored for 3 clarinets, 1 small clarinet and 1 small flute in Eb, 2 bassoons, 3 horns, 3 trombones and serpent, is quite rare as a mid-nineteenth century composition in the older Classical Period style. The conductor will recall that after Beethoven there was a distinct divide between those who wanted to continue the older style and those who were attracted to the new Romantic style. These two philosophies continued side by side and for this reason one sometimes hears Schumann called the “Classic Romanticist” and Mendelssohn the “Romantic Classicist.” In any case, for teaching purposes, this is a rare large band work in the true earlier Classical Style.

There is one place in this composition which deserves attention. There is in this composition an excellent example of a device much talked about in the early nineteenth century, the so-called “Rossini crescendo,” or sometimes “Rossini Rocket.” This was a very long written out crescendo for the purpose of drawing the attention of the audience to what might come next. It was first used by Gioacchino Rossini in his opera, La Pietra del Paragone in 1812. In the present score it is a crescendo covering 28 measures, beginning in measure 359 with a marking of “pp” and concluding in measure 387 with a marking of “ff.” During the course of these bars the composer writes “cresc. poco a poco” and in measure 371 a “mf.” It has been my experience in these cases not to have the performers worry about specific levels along the way, but rather to explain the musical idea and let the players do this by ear. It makes the result more alive and present tense as opposed to following something on paper.

This live performance was given on March 8, 1991, by the California State University, Northridge Wind Ensemble, David Whitwell, Conductor.