View cart “Wagner, Elsa’s Procession to the Cathedral” has been added to your cart.

Berlioz heard a performance of the Wieprecht Trauermarsch and spoke of it in his autobiography: “a very fine and well-written funeral march.” 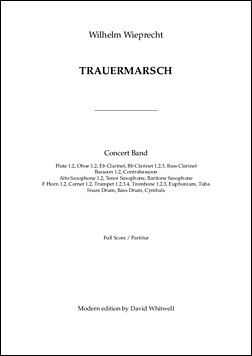 Wieprecht certainly personified the growth and development of military music in Germany during the first half of the nineteenth century and in his desire to improve the repertoire of the military band, he composed a large number of original compositions, not to mention numerous arrangements, for his concerts in Berlin.

Berlioz, who was touring Germany, heard a performance of this composition and spoke of it in his autobiography.

The concert ended with a very fine and well-written funeral march, composed by Wieprecht, and played with only one rehearsal!!