A composition dedicated to persons who have been of unusual importance to me. Suitable for high school ensembles. 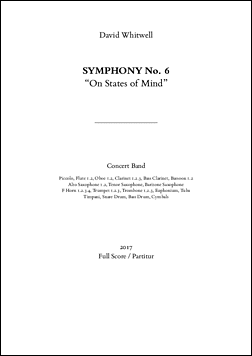 As I have begun that late period of life when one begins to reflect on the course of a life, I wanted to write some compositions dedicated to persons who have been of unusual importance to me.

I. Happiness
The first movement is dedicated to Craig Dabelstein, a professional educator and conductor in Brisbane, Australia. In addition to his own busy professional and family life, he has been responsible for editing and getting back into print more than fifty of my books and a great deal of my editions of early music.

II. Tranquility
The second movement is dedicated to Dr. Larry Harper, Professor of Music and conductor at Carroll University in Wisconsin. Larry was a former student, a brilliant horn player who met with unusual success in his graduate work at the University of Illinois. He is an unusually fine conductor and has worked extensively in Europe.

III. Faith
The third movement is dedicated to Dr. Ronald Johnson, conductor of the Wind Symphony at the University of Northern Iowa. He has been a former student and friend of many years and is an internationally known conductor, having worked extensively in Europe. Among his many accomplishments, he was awarded a teaching Fulbright in Hungary.

This composition is the only instance in which I have used sources other than mine. This comes from a desire to revisit some of my favorite music of my youth. The beginning music is freely based on the nineteenth century Russian Orthodox Hymn Dnew’ spasenie, from the Russian Court Chapel Choir Music, and a fragment by Peter Ilyitch Tchaikovsky (1840–1893), from the Communion Service of the Russian Orthodox Church, based on St. Chrysostom, an early Church Father of the Eastern Church.

Considering the long history of forced labor in Russian history, it seemed appropriate to me to contrast this music with that of the American slaves. Included here are references to my favorite hymn, “There is a Balm in Gilead,” with my mother’s favorite hymn, “Will There be any Stars in my Crown?” This is followed by free improvisation on “The Blind Man,” “This Train is bound for Glory” and “Joshua fought the battle of Jericho.”