Symphony Nr. 2, “Sinfonia da Requiem,” by David Whitwell. I decided to write a Requiem for Mozart, who did not have one performed when he died. The performance of this Sinfonia da Requiem has always had a strong impact on the audience, especially in concerts throughout Europe. 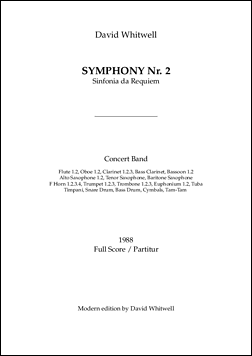 In 1968 my wife and I moved to Vienna in order for me to study conducting at the famous Akademie für Musik. We both felt that if we were going to live in Vienna we wanted to live in Vienna, right in the middle and not out in the 25th district. We were fortunate to find a small apartment on Kärtnerstrasse just one block and a half from the great cathedral, Stefansdom, which is the heart of the city.

From the first moment I stepped into this apartment I had a strong feeling of the presence of Mozart. Of course I immediately attributed this to the basic excitement of being, on my first trip to Europe, in the city of Mozart, Haydn, Beethoven, Brahms and Mahler. But this feeling of the presence of Mozart in this apartment continued for the entire year. Of course when my mind was otherwise involved in perhaps conversing with my wife, or studying scores, etc., the “Mozart Effect” was not apparent. But in moments of reflection the feeling returned. It was always there.

Twenty years later, in 1988, I read a new small book by Robbins Landon called The Last Year of Mozart’s Life. In this book he had reproduced a map of central Vienna dating from about the time of Mozart’s death. In these old European cities the basic blocks of building remain the same but the streets tend to change names over the centuries. It was, therefore, only when I saw this older map that I realized that my apartment was in the same building and on the same floor as the apartment in which Mozart died! The reader will understand the utter sense of shock as I thought back on those feelings of 1968. Indeed for some weeks I had the circumstances of the death of Mozart constantly on my mind.

To free myself from this obsession I decided, as a kind of exorcism, to write a Requiem for Mozart, who did not have one performed when he died. Fortunately I was on sabbatical the Spring of 1988 and could devote myself completely to the composition of this my second symphony, the Sinfonia da Requiem. There are a number of curious things about this work, beginning with the fact that the act of composition was almost without a sense of labor. Indeed some movements came to me faster than I could write them down. As an inexperienced composer I found this rather startling but I attribute it to the fact that my feelings were so unusually focused. It is when the feelings are not engaged that composition becomes difficult.

The performance of this Sinfonia da Requiem has always had a strong impact on the audience, especially in concerts throughout Europe. I attribute this to the music drawing upon the listeners’ own love of Mozart and thoughts of his early death. Indeed, on more than one occasion I have turned to face the audience at the end of a performance of this work in Europe to find numerous audience members crying.

This live performance by the University of Northern Iowa Wind Symphony, Ronald Johnson, Conductor, was given on 22 March 1996, in the Great Hall of the Franz Liszt Conservatory in Budapest.