After composing a few titles for concert band, I decided it was time for some chorale preludes — a favorite form among band composers. 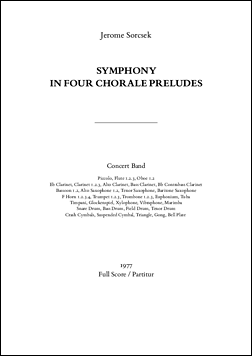 After composing a few titles for concert band, I decided it was time for some chorale preludes — a favorite form among band composers. I looked through my volume of J. S. Bach 4-part chorale settings with an eye toward titles rather than music. I chose several chorales to set in my fashion, and then came up with the idea of organizing them into a four-movement symphony. I was attracted to “Nun ruhen alle Wälder” over the idea of how quiet the deforested areas of Vietnam had become over the years following the end of the war. This chorale prelude was an elegy to the destroyed forests themselves, and by vast extension to the war dead on all sides.The second movement is an expression of wonder over the universe. The third movement betrays the warmth suggested by its title, yet has a moment of sobriety in the middle section. The chorale tune on which the final movement is based is a world-weary farewell, but in my setting it is rendered as a defiant assertion of life.