Savazzini’s Sinfonia for band is dedicated to Vittorio Emanuele II (1820–1879), King of Italy. 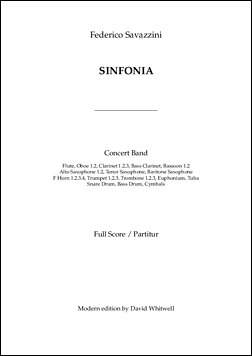 Notes on the Savazzini, Sinfonia

Federico Savazzini (1830–1913) was an active conductor in nineteenth century Italy and at the time he wrote this Sinfonia he gives his position as “Conductor of the Banda Nazionale of Castell’Arquato.” Castell-Arquato is a town near Parmi and home town of Luigi Illici, known for his libretto work for Puccini.

Savazzini’s name appears in a dispute regarding the hiring of the maestro di musica in Busseto, Italy. Verdi was much involved in this dispute as he was strongly advancing the candidate, Emanuelie Muzio, and he reminded the local officials that Muzio had been extensively examined for this position. Muzio, Verdi’s longtime friend and only student in fact became a distinguished conductor of opera in Brussels, London and in New York City. Verdi had wanted Muzio to go to Cairo to conduct the premiere of his opera Aida. In the end another Italian conductor made the trip, Giovanni Bottesin. With regard to the Busseto position, Verdi gave up in disgust when a new candidate, Federico Savazzini, had been nominated yet had not been examined.

Savazzini’s Sinfonia for band is dedicated to Vittorio Emanuele II (1820–1879), King of Italy, a title he assumed in 1861 as the first king of the unified nation of Italy.

It is not unusual to find among nineteenth century Italian composers who only rarely wrote for the band evidence of some confusion regarding even the names of the instruments. Here, for example, the three “Clarini” parts in Bb on the page look clearly like clarinet parts, and not some form of trumpet. Since flutes and oboes are missing in this score, we have constructed them from the Ab and Eb small clarinet parts, since, in our view, those instruments are aesthetically questionable.

The Genis was a kind of (now extinct) alto horn in Eb, which we have logically given to the Eb saxophone. The two Bombardini parts in C, bass clef, we have given to bassoons. Bassi profundi is of course the modern tuba. The Cassa, or bass drum, at the time was assumed to include the cymbals, but we have used more discretion.

As is also the case with composers writing for wind instruments with unusual transpositions, one often finds mistakes as was frequently the case in this composition.