Vincenzo Avallone was a musician and in 1902 founded the local band, the Banda dell’Associazione San Gennaro, and financed the instruments and uniforms. 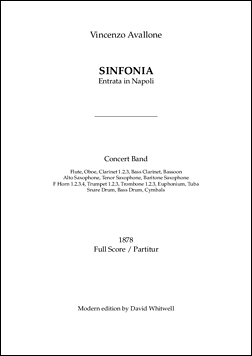 Vincenzo Avallone was born in the village of Panza, on the Ischia Island off the coast of Naples, on October 26, 1863 and died in Panza in 1934. He became a Catholic priest with the title, “Cappellano dela congrega Santissima Annunziata di Panza.” He also taught at the primary school, which is named after him, having given the land for the building of this school. He was also a musician and in 1902 founded the local band, the Banda dell’Associazione San Gennaro, and financed the instruments and uniforms.

The band ceased to exist during World War I but reorganized after the war as the Banda Aurora Città di Panza. The period of Fascism fell over Italy under Mussolini during 1922–1943 and for this period information is difficult to find. It does appear, however, that in 1927 Avallone was severely persecuted by the Fascists and was the victim of a physical attack by members of that political party and which left him paralyzed in one leg and in one arm.

My guess is that this very interesting band composition by Avallone was composed between 1922 and 1926. The title refers to a tunnel, also known as the Bourbon Tunnel, a geographical feature long associated with Naples which was based on a series of connecting aqueducts dating at least to the 17th century and perhaps much earlier. The tunnel served during subsequent years as an escape route from the city and in modern times as an air raid shelter.

The “Cannon” part which appears from time to time in the bass drum part reflects the ceremonial cannons one would have heard on important occasions in the Bay of Naples. I would recommend these individual effects be performed by another bass drum, perhaps with harder mallet heads, off-stage.