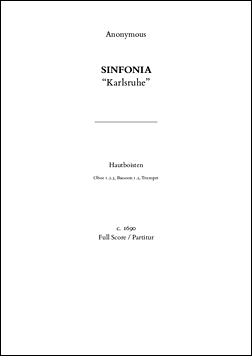 Notes on the Karlsruhe Sinfonia

Earlier music history texts assumed that the Hautboisten name referred to a small military band, usually of 2 oboes, a bassoon, and side drum, which would alternate compositions with a single trumpet player. From examination of the actual repertoire in libraries throughout Europe, today we know that there was an important indoor ensemble based on the Le Grands Hautbois of Louis XIV. This ensemble had doubled parts resulting in an ensemble of usually 12 players. The 12 player Hautboisten ensemble continued into the nineteenth century and, among other things, explains why Mozart wrote a wind ensemble for 12 winds and string bass.

The Hautboisten movement began in France with an ensemble of shawms, bassoons, and trombones under Francis I (1494–1547) of France. A later continuation of this royal tradition, now known as the Les Grands Hautbois, under Louis XIV (1638–1715), became an ensemble which spread to Germany (with the new oboe) beginning about 1680.

While the Les Grands Hautbois of Paris also included trombones on occasion, it remained a basic 12-member ensemble of oboes and bassoons. It was this instrumentation which was first heard in Germany, but around 1705 two horns were added. Once one had an ensemble of oboes, bassoons and horns, one had a Classical Period Hautboisten ensemble except for the difference in musical styles.

The present German Hautboisten example, the anonymous Sinfonia found in Karlsruhe, represents the first stage of the indoor ensemble in Germany. The trumpet, when used in the inside concert, appears as a normal member of the ensemble. Earlier in the German Baroque there had been a very small military band with perhaps 2 oboes and 2 bassoons, with a drum. For this street use this small ensemble alternated with a trumpet, who marched in front if the ensemble was moving. In such a case the trumpet played alone, using the traditional Renaissance sonatas, etc., which were part of the repertoire of this instrument. Therefore, to provide rest, the trumpet would play a composition, then the little Hautboisten military band would play, then the trumpet, etc., continuing in alternation.