Prokofiev wrote the March, Op. 99 in 1943–44 for a Soviet military band and it was premiered that year in a Moscow radio broadcast. 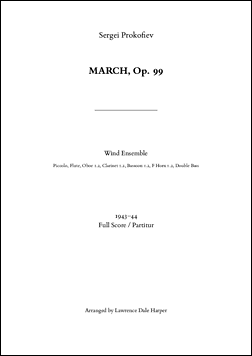 Prokofiev wrote the March, Op. 99 in 1943–44 for a Soviet military band. The premiere took place in a radio broadcast in that year in Moscow. The March made its way to the west within a few months’ time after the United States premiere in 1945 with Serge Koussevitzky conducting the Combat Infantry Band. Soon thereafter, the publication in 1946 of a new performing edition by Paul Yoder for full concert band brought the piece into widespread use. This transcription for double woodwind quintet and string bass maintains much of Prokofiev’s original orchestration, but the reduced instrumentation allows for a brighter tempo and more exciting delivery than most larger bands can achieve.