Prelude, BWV 922 by Johann Sebastian Bach, transcribed for concert band by David Whitwell. The Prelude, BWV 922, is an extraordinary example of minimalism. Bach's seemingly endless variations on so simple a figure is a textbook case of harmonic development. 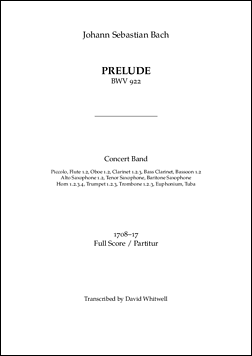 I dare say most of us in school were made familiar with primarily the church music of J. S. Bach, together with a few keyboard and violin solo works. Gradually, as one has time, one discovers the remarkable variety of music contained in that vast output by the great master. Some of the early more Romantic compositions are a surprise as we tend to forget that Bach did not always look like his Leipzig portraits, but was also once young and Romantic.

A recent discovery, and shock, for me was the Prelude, BWV 922, an extraordinary example of minimalism. And as is usually the case, when one has come to conclude that one has heard all there is to hear in some style, such as minimalism, along comes Bach who casts the entire field into subservience by the genius of his harmonic vocabulary. His seemingly endless variations on so simple a figure is itself a textbook of harmonic development.

To the eye this composition may look difficult, but because of the slow tempo it is not. Even the bravura beginning woodwind passage, which may look impossible to a conductor, is only typical of the rapid diatonic passages every woodwind player plays every day in warming up. Thus in this passage we see not Bach’s challenge, but a testimonial of his own powers of observation.