Orient et Occident, Op. 25 by Camille Saint-Saëns and modern edition for concert band by David Whitwell. Composed for a gala evening of the Union Centrale des Beaux-Arts in October, 1869. 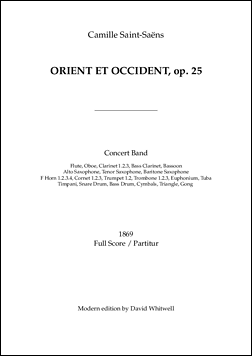 This original composition for band was composed for a gala evening of the Union Centrale des Beaux-Arts in October, 1869 which was concerned with the relationship of art and industry and featured an exhibition of oriental art. The composition was dedicated to his friend, Theodore Biais. A later performance, with the composer conducting, was given at the World Fair in Paris on October 21, 1878.

This modern edition by David Whitwell includes a few important additions which the composer made in later editions, including the addition of timpani.

The live performance was given on May 9, 1981, by the California State University Wind Ensemble, David Whitwell, Conductor.