Alto Saxophone solo with Concert Band by Victor Buot (d. 1883), modern edition by Craig Dabelstein (1973–). Victor Buot was Chief of the Artillery Band of the National Guard in France. 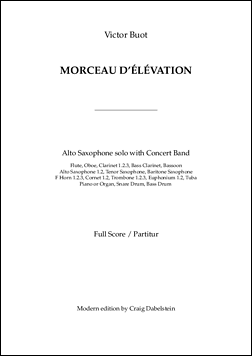 Victor Buot (d. 1883), Chief of the Artillery Band of the National Guard in France, was one of the most prolific composers of nineteenth century French band music. Among his extant compositions are many marches (one of which even became popular in Germany!), polkas, gallops and valses.

Of more interest today are his serious compositions for band, including symphonies, overtures and aesthetic fantasies. He is also a representative of the very large repertoire of nineteenth century French music written for the Church. These include single compositions, such as the present work written to be performed during Communion, but also large-scale compositions. Consider, for example, his Stabat Mater consisting of six movements: