Marcia Funebre in Honor of Manzoni, by Amilcare Ponchielli, modern edition for concert band by David Whitwell. An elegy of profound emotional depth. 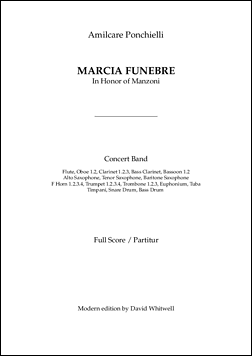 The Marcia funebre in honor of Manzoni was composed by the great Italian composer Amilcare Ponchielli (1834–1886). Alessandro Manzoni (1785–1873) was a much loved Italian poet, whose I Promessi Sposi (1827) became a symbol of the Italian Risorgimento and contributed to the development of a unified Italian language. Among the other musical compositions composed in his honor was the great Requiem by Giuseppe Verdi.

There are a number of these commemorative funeral marches among the ninetenth century Italian original band repertoire. The style is almost never of a functional nature which might be used in an actual funeral procession. Instead they are more in the nature of an elegy and often of profound emotional depth.