This live performance was given March 8, 1991 by the California State University Wind Ensemble, David Whitwell, Conductor. 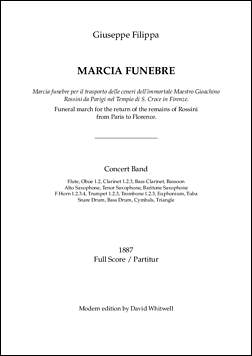 This original band composition was composed for the return of the remains of Rossini to Florence. He died in 1868 as was buried in the Père Lachaise cemetery in Paris. In 1887 his remains were transported to the Basilica di Santa Corce in Florence, Italy, in a ceremony which attracted 6,000 people.

Giuseppe Filippa was born in Savigliano, Italy in 1836 and died in 1905 in Pesaro. During his life he was known primarily as a performer and teacher of the trumpet and he published several volumes of progressive studies for cornetto or flicorno in B-flat during the 1880s [Milano: F. Lucca]. His son, Giacomo Filippa, became a well-known violinist.

As a composer we know of only a few songs and music for the church, a brass quintet and the curious Walzer alla memoria di Dante Alighieri. His only composition which remains in the repertoire today is the Marcia funebre, which is still performed by civic bands in Italy.