Marche heroique, for the return of the remains of Napoleon to Paris (Retour des Cendres), by Fromental Halevy, modern edition for concert band by David Whitwell. 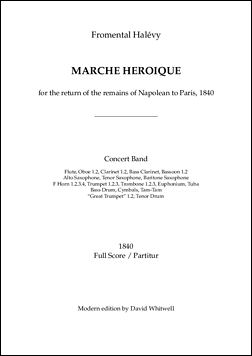 Jacques-François-Fromental-Élie Halévy (27 May 1799 – 17 March 1862) was a French composer remembered mainly for his opera La Juive, which was praised highly by Mahler and Wagner. After studying at the Conservatoire with Cherubini he became an active choral conductor, composer and was elected to the Institut de France in 1836. His son-in-law and former student was the composer Georges Bizet.

The Marche heroique was composed for the great occasion when the remains of Napoleon were returned to Paris on 14 December 1940 (Retour des Cendres). A great procession carried the remains across Paris in the fashion of the great processions of the French Revolution. Indeed one of the features of this Marche are long pauses filled only by the sound of a resonating gong, which was the central feature of one of the great compositions of the Revolution, the March lugubre of 1790 by Gossec. One newspaper reported on the use of the gong, as it is also used by Halvey, as ‘the notes, detached from one another, break the heart, pulling at ones insides.’ Another newspaper wrote that the sound of the gong ‘filled the soul with religious terror.’ These accounts reflect the fact that the large gong had never before been heard in Paris and this great public sensation caused it to be imitated in later compositions, such as the Requiem for Louis XIV (1815) by Bochsa.

One observer of this solemn procession was the writer, Victor Hugo, who gave his impressions as follows:

The whole possesses a grandeur. It is an enormous mass, gilded all over, whose stages rise in a pyramid atop the four huge gilded wheels that bear it. […] The actual coffin is invisible. It has been placed in the base of the carriage, which diminishes the emotion. This is the carriage’s grave defect. It hides what one wants to see: that which France has reclaimed, what the people are awaiting, what all eyes were looking for—the coffin of Napoleon.