This original march for wind band, scored for flute, 2 oboes, 2 clarinets, 2 horns, 2 bassoons, 2 trumpets and a trombone, may the be final composition of this famous German composer, who died on June 5, 1826 in London. 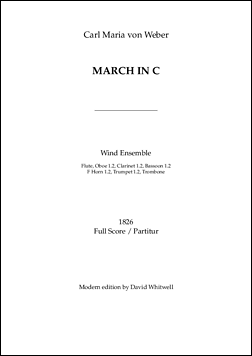 Notes on the Weber March in C

This original march for wind band, scored for flute, 2 oboes, 2 clarinets, 2 horns, 2 bassoons, 2 trumpets and a trombone, may the be final composition of this famous German composer, who died on June 5, 1826 in London. Already seriously ill, Weber went to London for the April 12, 1826 premiere of his opera, Oberon. The following month, on May 13, there was an annual dinner of the Royal Society of Musicians. The famous pianist, and teacher of Mendelssohn, Ignaz Moscheles (1794–1870), wrote of this dinner,

Included among the music performed on these occasions was usually one of the Festival Marches for wind instruments that had been composed for the Society by such distinguished foreign masters as Haydn, Winter and Spohr. Weber did not attend but a new March by him was given a first performance.

At that very time Weber entered a new phase of deterioration in his illness and he was unable to compose anything worthwhile. Much agitated by this thought there occurred to him during the night of 5 May when he would not sleep, the theme of a March that was in his Six pièces á quatre mains. Other ideas attached themselves to it, and the result was the fine March … Lying back in an armchair in his feebleness he dictated the second and third parts of this March to Fürstenau, including what in his view was proper to the instrumentation.

At the end of this manuscript Weber wrote “March Da Capo,” together with his signature. This manuscript found its way into the collection of the great authority of the music of Weber, Friedrich Wilhelm Jähns, and is included in his catalog of the composer’s works under the number 307. The work is found today in the Prussian National Library in Berlin under the call number, Web. IV BXIV, 1278.

The first modern edition of this composition was made by an old friend of mine, the oboist, Josef Marx, and listed in the catalog of his publishing company, Miginnis & Marx.

This modern edition includes my editorial marks as I believe were characteristic of the style.