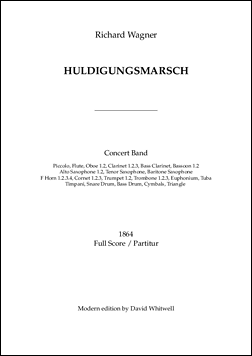 As is well-known, after a long period of frustration professionally, financially and personally, Wagner was ‘rescued’ by the appearance of Herr Pfistermeister, the secretary to the newly crowned king of Bavaria, Ludwig II, who announced the intent of the new king to guarantee the financial support of Wagner and his music. Wagner first met the king on 4 May 1864 and in gratitude began the composition of the Huldigungsmarch in honor of the king. The first performance, by three combined infantry bands stationed near Munich, was given on the king’s nineteenth birthday, 25 August 1864.

This modern edition for band of the Huldigungsmarsch by David Whitwell is based on the original band edition published by Schott in Mainz in 1871 and an arrangement by Wagner himself the following year for piano which includes details which likely reflect how the composer played the work himself at the piano.

This live performance of 8 May 1998 was given by the California State University, Northridge, Wind Ensemble, David Whitwell, Conductor, with student guest conductor, Miss Janna Gungels.