This arrangement of the second movement for band by the composer himself was done on English paper and surfaced during the 1980s in a private collection in Sweden. 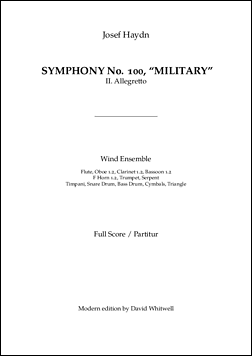 Notes on the Haydn Allegretto

Haydn’s Symphony Nr. 100 was composed for the Salomon concerts in England in 1794. The arrangement of the second movement for band by the composer himself was done on English paper and surfaced during the 1980s in a private collection in Sweden. This symphony became known as the “Military” Symphony in England due to the large percussion requirements of the second and fourth movements. In addition, the second movement of the symphony is the only one with clarinet parts, which, added to the percussion, made it an ideal choice for a transcription when someone in England apparently requested one.

In the autograph score for the band version Haydn did not take the time to write out the percussion parts but only merely wrote, “Military instruments.” In my edition I have taken that to mean the use of the instruments he used in the symphony itself and so they are identical here. It is also significant that Haydn carefully preserved in the band manuscript the frequent dots over melodic notes, which the reader must understood meant an accent and had nothing to do with the modern concept of staccato.

In London, when Haydn attempted to conduct during the first rehearsal—his own composition and a work no one had ever heard before—he caused hard feelings on the part of the “leader,” the first violinist whose role in the era before modern conductors was to provide the tempo for the orchestra. A newspaper “war” ensued, pro and con, and among the contributors was the famous Charles Burney, who wrote,

There is a censure leveled at him…for marking the measure to his own new composition: but as even the old compositions had never been performed under his direction, in this country, till the last winter, it was surely allowable for him to indicate to the orchestra the exact time in which he intended the several movements to be played, without offending the leader or subalterns of the excellent [orchestra] which he had to conduct.

This performance was given at the North German Radio Studios in Cologne in July 1989, by the California State University, Northridge Wind Ensemble, David Whitwell, Conductor, Ronald Johnson, Guest Conductor.