E.T.A. Hoffman said that Spontini’s work, Grosser Sieges- Und Festmarsch, had “fiery energy and deep feeling and that the unexpected entry of God Save the King gave it splendid brilliance.” 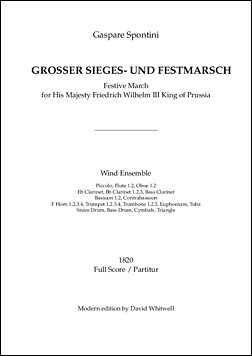 As a youth, Spontini studied at the Conservatorio della Pietà de’ Turchini in Naples. In 1803, he went to Paris, where he was appointed court composer in 1805. With the encouragement of Empress Joséphine in 1807, Spontini wrote La vestale, his best known work. Its premiere at the Opéra in Paris established Spontini as one of the greatest Italian composers of his age. His contemporaries Cherubini and Meyerbeer considered it a masterpiece, as did later composers such as Berlioz and Wagner.

The Festive March was composed for a concert held August 3, 1820, to celebrate the birthday of the king in Berlin. In attendance was E. T. A. Hoffmann, the most famous critic of the early nineteenth century in Germany, and as a result we have a very rare example of a contemporary review of the premiere of an early band composition. The review was published in the Vossische Zeitung, in the issue of August 5, 1820, in Berlin. The first composition heard on this concert was an arrangement of a popular song which Spontini had composed after his appointment as the music director for the king in Berlin, Borussia. Preussischer Volksgesang. The original version of this song was scored for orchestra, but on this occasion Spontini expanded the forces to include the military band which would perform the Festive March and a choir of 130 voices.

Hoffmann was quite moved by the result produced by Spontini as a conductor.

The strength, fire, and sublime exuberance which has won universal admiration for Spontini’s works are also evident in this song, which in the simplicity and dignity of its thought bears the stamp of true inspiration, this fire glowing within his works to those chosen to perform them. In his hand the baton becomes a veritable magic wand, with which he wakens into life dormant forces which then rise up in majestic awareness of their power.

The second composition on the program was the new work especially composed for the occasion by Spontini. This work was composed for a large band, although on this occasion the strings and singers joined in. Hoffmann recalls that the Festive March was performed “with fiery energy and deep feeling and that the unexpected entry of God Save the King gave it splendid brilliance.”

One could not deny, therefore, that the effect calculated by our excellent Spontini was in fact overwhelming. Only that which is conceived and brought to life with inspiration can awaken inspiration, and so it was that this inspiration was expressed in the liveliest manner by the tumultuous applause of an enraptured public.

The fundamental question regarding the performance of this work is that of tempo. The published parts call the first part “Allegro brilliante” followed by “Metronome von Maelzel No. 92 = [quarter-note].” This, in 1820, is undoubtedly one of the very earliest examples of published metronome indications, Beethoven having been the first composer to use them in 1817. The problem is that quarter-note = 92 is too fast to be musical, by about the same degree that the early Beethoven markings are too fast.

What is one to think of this problem? One possibility is that perhaps the first metronomes ran too slowly, thus influencing the composer to write higher numbers. In the case of Beethoven, his own metronome has been found, but the weight is missing, making it impossible to test its accuracy in this regard.

Another possibility which occurred to me was that perhaps the first metronome was not measured against the clock, but against an arbitrary numerical chart of some kind. Indeed, there were other inventors working on this problem and in one case I have studied the numbers are not measured against the clock. This is an educational work entitled, Des Herrn Zmeskals Tact Messer Wiener Zoll [“inch”] A manuscript by Georg Druschetzky (1745–1819) gives both markings for the Maelzel metronome and for a Wiener Zoll. In cases where the metronome is given as perhaps quarter-note = 74, the Wiener Zoll is indicated at 9! However, this solution does not apply in the case of the Spontini as the original patent for the metronome clearly specifies the relationship with the clock.

Yet another possibility which has occurred to me is that we have here a misreading of the manuscript by the engraver, taking “72” to read “92.” A tempo of 72 for the beat does result in a logical, musical result and so I prefer to think this is what happened. In any case, in this edition I have changed this number to read “72.”