Wieprecht's desire to improve the repertoire of the band led to a large number of original compositions and numerous arrangements for his Berlin concerts. 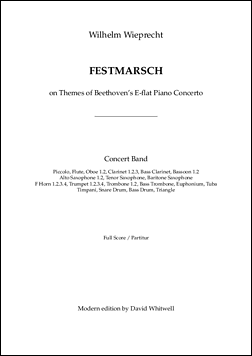 Wieprecht certainly personified the growth and development of military music in Germany during the first half of the nineteenth century and in his desire to improve the repertoire of the military band, he composed a large number of original compositions, not to mention numerous arrangements, for his concerts in Berlin. While Wieprecht’s Festmarsch on Themes of Beethoven’s E-flat Major Piano Concerto is an original composition, it does remind one that before mid-nineteenth century many citizens first heard the music of Beethoven in arrangements for military band.