Wagner, Elsa’s Procession to the Cathedral

Elsa’s Procession to the Cathedral from Lohengrin, act 2, scene 4, by Richard Wagner, arranged for concert band by David Whitwell. Wagner himself recommended this music as an addition to the band repertoire. 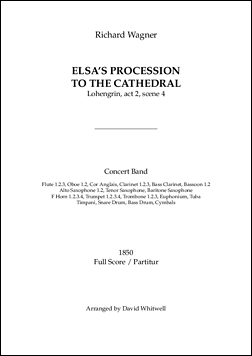 Notes on Wagner’s Elsa’s Procession to the Cathedral

This music in the opera is virtually a band composition as it stands. After thirty-two bars one violin part joins in unison and eventually two male choirs. Curiously, the earlier band arrangement of this music overlooked one of the male choirs, which this edition includes. It is interesting that Wagner himself recommended this music as an appropriate addition to the band repertoire. In a letter to Friedrich Wilhelm Graf von Redern, dated Dresden, 26 June 1846, Wagner wrote,

While I doubt that there are many pieces in my opera that are suitable for production as military music, I permit myself to draw your attention, however, particularly to one number which has gone exceedingly well on parades here in Dresden; I refer to the first section of the fourth scene of the second Act; it is in the style of a March with chorus … that lends itself well to treatment as an effective piece for military band.

Wagner’s use of the term “Military Band” simply reflects the large band with woodwinds and brass and does not suggest a “military” style. Quite the contrary, in another letter Wagner specifically speaks of the style he had in mind.

The particular atmosphere which my Lohengrin should produce is that here we see before us an ancient German kingdom in its finest, most ideal aspect. Here no one does anything out of mere routine and court custom, but in every encounter the participants take a direct and genuinely personal part; here there is no despotic pomp which has its “bodyguards” (oh! oh!) and orders the “people pushed back” to form a “lane” for the high nobility,… I beg of you, for God’s sake, take out that awful stuff with the masters of ceremonies, marshals, bodyguards, etc.: they must have no further place here. Let my Lohengrin be beautiful, but not ostentatious …

Elsa must—on the high ground before the palace—actually come to a stop. She is moved and affected, as if overcome by bliss. Only after 8 measures does she once more proceed very slowly toward the cathedral, sometimes, pausing, cordially and naively acknowledging greetings. Not only does it take shape this way, but it actually becomes what I intended it to be; namely, no march-like procession, but the infinitely significant advance of Elsa to the altar.

This live performance was recorded in 1975 in San Francisco by the California State University, Northridge Wind Ensemble, David Whitwell, Conductor.