Domine Salvum Fac Regem by Franz Liszt, modern edition for voices and wind ensemble by David Whitwell. “God save the king! Answer us when we call.” 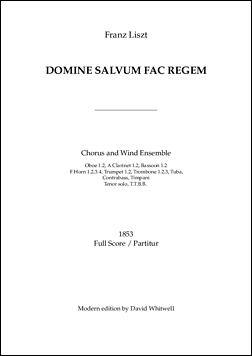 A young student composer, Peter Cornelius (1824–1874), nephew to the famous painter, Peter von Cornelius, came to Weimar to seek Liszt’s advice. In a letter of September 1852, Liszt recommends to the young man, “You have but to assimilate Palestrina and Bach, then you can let your heart speak …” And it is the older style that we find in Liszt’s Domine salvum fac regem for male voices and winds.

Originally composed with organ accompaniment, a setting with wind instruments was needed for a performance at the coronation of the Grand Duke of Saxe-Weimar-Eisenach in 1853. Liszt turned to another young composer who was living in Liszt’s circle in Weimar at the time, Joachim Raff (1822–1882), to score the works for winds. Liszt had used Raff for helping with the orchestration of other works in 1850–1853 and, indeed, Raff later claimed to have played a major role in the orchestration of Liszt’s tone poem, Tasso. Raff’s opera, King Alfred, was staged for the first time during the coronation festivities. Wind conductors will recall that Raff also composed a Sinfonietta for 10 winds, Op. 188.

The translation of the Latin text matches the grand ceremonial style of this composition.

God save the king!
Answer us when we call.