The Clarinet Concerto by Finali composed in the early 1800s, is a three-movement, 13:30 minute work for solo clarinet and small wind ensemble. 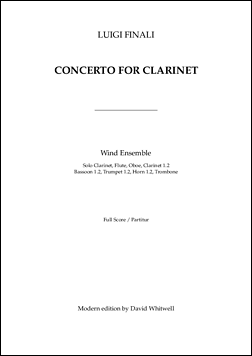 Luigi Finali was educated by his uncle, a lawyer in Parma named Luigi Torrigiani (who had married the sister of his father!). He studied piano and composition with Ferdinando Simonis and began composing at an early age, including a cantata, Hero and Leander.

In 1818 the local aristocrat, Maria Luigia, was responsible for the reconstruction of the Philharmonic Academy, where Finali was made a teacher of vocal music in in 1822 was given the title, “Kapellmeister Honorary Ducale Concert SM.” On October 24, 1826, following the premiere of his opera, Il re Teodoro in Venezia in the Ducal Theater in Parma he joined the faculty of the School of Simonis where he taught vocal music until his death of tuberculosis in 1831. He seems to have been well-known as he was made an honorary member of the Philharmonic Academy in Piacenza and a corresponding member of one in Cremona.

In addition to his opera Il re Teodoro in Venezia (1826) he composed an operetta, The Lost Slipper (1824), a Symphony in Eb for small orchestra, a Cantata for the Birthday of Maria Luigia for chorus and orchestra which he conducted in 1822, and a few large Church works, in addition to educational works for singers and piano students.