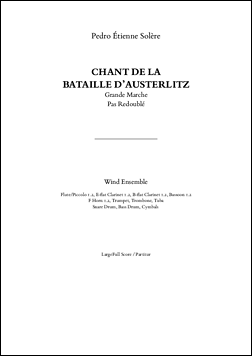 Pedro Étienne Solère (1753–1817) was a French composer, music educator and clarinetist. By the age of fourteen he was already an advanced clarinetist and performed in the music corp of the infantry regiment. He later studied in Paris with Michel Yost. His fame spread internationally on concert tours in Italy, Spain and Russia. Solère was appointed as first clarinet in the King’s orchestra, and was Professeur de Musique à l’Académie Impériale de Musique. Solère’s compositions include an Overture for the bands of the French Revolution, five publications of marches for band, and much clarinet music published between 1793–1800.

Nicolas Dahlmann (1769–1807), to whom this work is dedicated, was a French cavalry general (Colonel Commandant les Chasseurs à Cheval de la Garde de Sa Majesté l’Empereur et Roi d’Italie) of the Napoleonic wars and the son of a trumpeter. So revered was Dahlmann that upon his death, Napoleon granted his widow a pension of 6,000 francs and in 1811 accorded his only son the title of Baron de l’Empire at the age of ten. On the instructions of Napoleon, Dahlmann’s heart was embalmed and taken to Paris where it was placed at rest in the Pantheon.

The Battle of Austerlitz in 1805, also known as the Battle of the Three Emperors, was one of Napoleon’s greatest victories and is considered a tactical masterpiece.