This wonderful, romantic composition by the nineteen-year-old Bach was written upon the departure of his elder brother, Johann Jacob Bach, to join the army of King Carl XII of Sweden as an oboist. It is a rare programmatic work for which Bach supplied the individual titles.

Capriccio, “On the Departure of a Friend” BWV 992
1. An Affectionate Plea to the Friend not to Embark
2. Reflections on the Misfortunes of Travel
3. Mutual Lamentations
4. The Farewell
5. Aria and Fugue on the Post Horn Call
Johann Sebastian Bach (1753–1817)
Modern edition by David Whitwell (1973–) 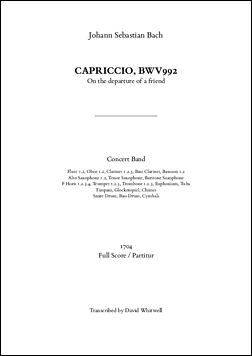 This is an early work of Bach and is thought to contain his very first Fugue. The composition is usually listed as having been written for keyboard, but the autograph score does not say this and it is not written on the usual two stave format for such an instrument. In fact the work is not quite finished, with some passages not fully written out (existing only in thorough-bass figures). I believe Bach had in mind a chamber work for keyboard and three other instruments.

In any case an early authority believed the work was written upon the departure of his brother, Johann Jacob Bach, to join the army of King Carl XII of Sweden as an oboist. Bach supplied the titles and of particular interest is the Post Horn figure in the final movement. The Post Horn, as the name suggests, was carried by mailmen and blown to alert the next village of his arrival in order to speed up delivery. There is a remarkable tribute to this instrument in the third movement of the Mahler Third Symphony, being a reflection of how he remembered hearing this sound floating through the valleys as a child. One can also find this figure in the Scherzo of the Beethoven Ninth Symphony and in the Mendelssohn Overture for winds.

This live performance in 1981 was recorded in The Netherlands by the California State University Northridge Wind Ensemble, David Whitwell.