The Amen Fuga from Nicolas-Charles Bochsa’s masterpiece for band, the Messe de Requiem, 1815. 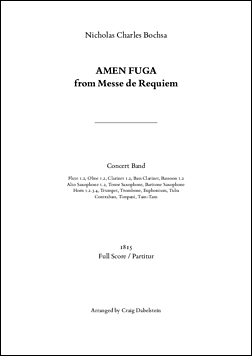 After Napoleon was first defeated by a coalition of European powers in 1814, the coalition restored the throne of France to Louis XVIII on 6 April 1814. Louis XVIII returned to Paris on 24 April 1814 and the subsequent celebration of the Bourbon Restoration was the occasion for a Motet, by Bochsa, “Composed for the celebration of the Apothe ́ose of Louis XVI and the Happy Return of the Bourbons”.

After “The Hundred Days,” during which Napoleon attempted to regain control, another, much larger celebration was held on 15 January 1815 centred on the reburial of the remains of Louis XVI and Marie Antoinette. It was for this celebration that Bochsa and Cherubini composed Requiems in honour of Louis XVI.