Biem Abschied zu singen, op. 84, by Robert Schumann, modern edition for voices and wind ensemble by David Whitwell: a warm and passionate composition which swelled from the composer’s heart. 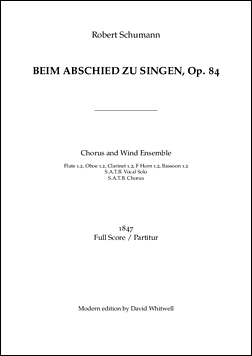 This wonderful work for chorus and winds was composed after Schumann and his family moved to Dresden in December, 1844. It was soon after this move that the health of Schumann began to sink. His doctor, Dr. Helbig, recorded that Schumann suffered from exhaustion, insomnia, auditory delusions, depression, tremors and various phobias. All this the doctor attributed to Schumann’s concentration on composition which the doctor urged Schumann to abandon. Fortunately Schumann did not follow this advice for this became a very productive period of six years in which more than one third of his compositions were created.

Following some subscription concerts in Dresden which were not successful, Robert and Clara made a tour to Vienna and Berlin where again their performances were not successful, due to lack of local preparation. It must, therefore, have been encouraging when Karl Emanuel Klitzsch (1812–1889), a friend of the Schumanns and one of the co-founders of the Neue Zeitschrift für Musik and the music director in Schumann’s hometown of Zwickau, organized a music festival in honor of Schumann on July 10, 1847. Schumann on this occasion conducted the premiere performance of this work, which he called a “Lied für Chor mit Blasinstrumenten.”

The somber and nostalgic character of this composition may well have been influenced by the unexpected early death a month before, on May 14, 1847 of their close friend Fanny Mendelssohn, sister to Felix Mendelssohn. Schumann mentioned the character of this work in a letter of 29 June, 1847 to Klitzsch, when the festival was being planned,

Here is my farewell song. I find it a little melancholy, but we should at least give it a try! If we feel it is too sad as a final piece, then we can omit it.

The composition was performed, with Schumann conducting, on a program which included his second Symphony and Piano Concerto, with Clara as the soloist.

Later Klitzsch wrote a glowing review of the composition in the Neue Zeitschrit für Musik of August, 1850.

A rather warm and passionate composition which swelled from the composer’s heart. This song radiates this passion and is so close to Schumann’s character that we cannot expect a different interpretation than the one presented. The entire piece is very simple, the chorus alternates with the soloists, whereby there are many shadings to enhance the attraction of the sonorities, further enhanced by the discreet support of the wind instruments. While it is a simple song and easy to perform, it still requires great delicacy in interpretation.

For the text for this song Schumann chose a poem by Ernst Freiherr von Feuchtersleben (1806–1849), which in translation reads,

It is certain in God’s wisdom
that from our dearest loved one
we must part,
even if there is nothing in the world
that falls, oh! so bitterly on the heart
as such parting, yes parting.

As to you is given a small bud,
thus put it into a tumbler,
but know this, yes know it!,
a little rose that blooms tomorrow,
the following night will see it wither,
know that, yes know it.

And as God has given you a devotion
and you hold that love quite dearly,
as your own!
It will be about eight boards, then,
you soon will put her in!,
weep then, yes weep!

Now, you must also understand me properly,
yes, understand!
If people do thus part, then,
they say: we’ll see each other again,
yes, again.

In the German text the song ends with a phrase which, thanks to the movie, The Sound of Music, is known to all English speakers – auf Wiederseh’n.

Perhaps Wagner, who was in Dresden while Schumann lived there, heard this work, for he used the same text for one of his compositions in 1858, “Es ist bestimmt in Gottes Rat,” WWV 92. Still later, Ferruccio Busoni (1866–1924) also used this text in his Zwei Lieder, Nr. 2 of 1879. Curiously, Beethoven wrote a tavern song, Woo109, with the same title, but entirely different text.