Begräbnisgesang, Op. 13, by Johannes Brahms, modern edition for chorus and wind ensemble by David Whitwell. Clara Schumann said of this composition that it was “most glorious.” 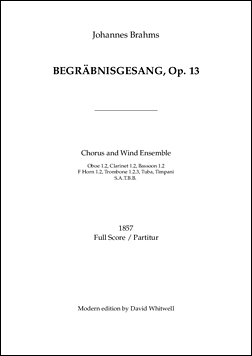 It was at this time that Brahms composed his Begräbnisgesang for chorus and wind band, a work Brahms himself conducted several times, the first under his baton being a performance at the Gradener’s Academy in Hamburg on December 2, 1859.

Traditionally scholars have this work was a study for the second movement of the later famous Requiem. But I believe there is a more important story behind this work. The reader will recall not only the long friendship which Brahms had with Robert Schumann, but his debt to Schumann for the promotion of his career. It is also well-known that Brahms had a close relationship with Schumann’s wife, Clara, and later widow, one of the great love stories of the nineteenth century. The three were very close during Schumann’s final illness and death on July 29, 1856. There is a long tradition in the Catholic Church, observed in Europe and in South America, that after one’s death the survivors must wait one year or more before the end of mourning and the celebrating a major Mass or commemoration. Therefore, one year after Schumann’s death would bring us to the general period when this work was written.

Since scholars have failed to find any other specific reason, or for whom, Brahms wrote this very special composition, I believe it was composed for some special private occasion when he and Clara and other family and friends gathered to remember Robert Schumann. It seems clear to me that the sixteenth century text, Nun lasst uns den Leib begraben, which Brahms selected for this music had Schumann in mind, and seems too specific to be used for general purposes. It speaks of “his work, sorrow and misery” and his having been “weighed down by fear.” Now he is at peace and [his reputation] will become “Radiant like the brilliant sun.”

In 1973 I had the honor of being requested by the US State Department to record this composition for their “Voice of America” broadcasts in Europe.